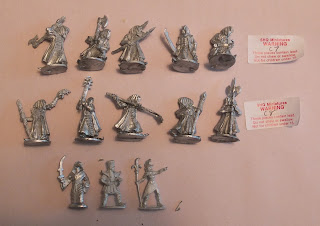 The two packs of "Cultists", with some of our figures as a size comparison. 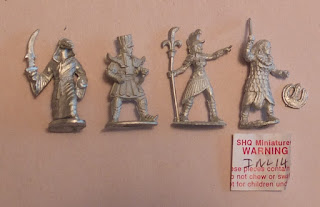 I made a small order with SHQ Miniatures (in the UK) recently to check out some of their packs I had been interested in for some time. The Ancient Indian packs were once part of Newline Designs.

The cultists are slightly large and also slightly bestial with longish arms and clawed fingernails. No faces are visible and one wonders if they have any vestiges of humanity left under those cowls! In other words, they are perfect "cultist" figures! :-)

In My Tékumel I will be using them for followers of the Pariah Gods.

Also of interest are a few packs from the Ancient Indian range:

The Forest Indians will make nice proxies, possibly for tribesmen from the Gilráya Forests in south-eastern Tsolyánu. There is really no information on these tribes and they are only mentioned in passing a couple of times. The figures size up nicely with ours and are clean shaven which is nice. Sadly, there is only the one pack of these guys.

Next up is the Warrior Queen, available on foot or in a chariot. Again the figure is quite nice, if simple in design. I like the scale hauberk especially.

Lastly, the Maiden Guard which are a part of most Ancient Indian ranges. There are four leg poses which adds some nice variety.

There are a few other parts of the SHQ range I would like to explore at some point. There is a Han Chinese range that includes "HCL29 Sitting Tiger Catapult and 5 Crew". No picture though. There are convict and tribal figures in the Chinese ranges that might prove useful in the future...