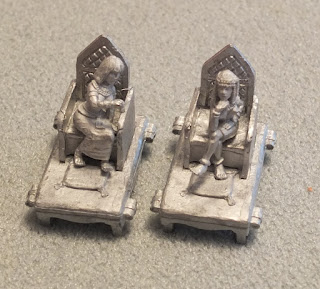 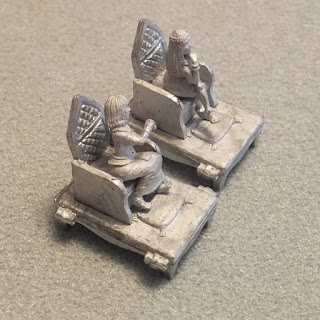 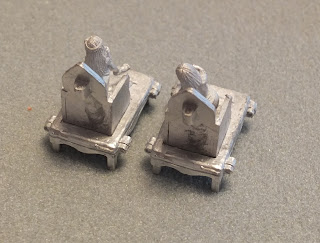 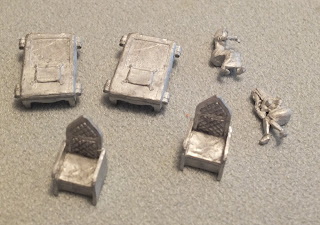 Here are Dark Fable's pretty Senet players all ready for a day's shopping in Thebes! They're riding the Tékumel Project's Qól Palanquin.

But wait, where are their bearers? Poor Girls! No Shopping today. :-(

(Unfortunately the Qól are both too sinister and too afraid of the bright sun to be much good for shopping.)

Qól Palanquin by Roderick Campbell and available from the Tékumel Project.
Posted by phf at 4:25 PM 1 comment:

Diving back into the Digitizing Tékumel project after a long break. Here is a re-imagining of the sandbars in the Gulf of Perudáya. Those in my first attempt I just drew more-or-less at random. For these I have traced the shallows as actually marked on the Swords & Glory map.

These sandbars would be exposed to varying degrees at low tide. They would be constantly changing shape but would roughly the general shape as drawn. There would be a myriad of smaller channels cut through them that would also change over time. Local Knowledge suddenly becomes a very important skill! I expect that there are clans that specialize in providing pilots, which merchants can hire to navigate them through the channels. Some merchants might try to go it alone - at their own risk. And other times there might be pirates who masquerade as pilots to deliberately lead a ship astray, running it aground so it can be looted.

Also, I should point out that a while ago I started some boards on Pinterest under the heading "Inspiration for Tékumel" with the aim of pinning pictures that I think somehow - sometimes in only the smallest of ways - offer some sort of inspiration as to what Tékumel might look like. It's hard, of course, because Tékumel is Earth but I think for the most part I've selected pictures that provide at least a tiny bit of inspiration. If only to ensure that people get out of the Medieval European mindset that prevails in most settings.

I've started adding more and more specific boards, targeting cities and geographic regions of Tsolyánu, for example. The most recent of these is the Gulf of Perudáya board which features the picture above. I am planning on integrating my digitization project with Pinterest even further as I go along.

The Meeting in No Space 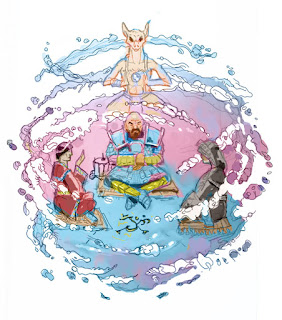 Depicting a scene from "The Man of Gold"...buy the book!

Note that my use of the term "No Space" is just a sign of the influence of Dune on me; the term was never used by Professor Barker to my knowledge.
Posted by phf at 6:41 PM No comments: