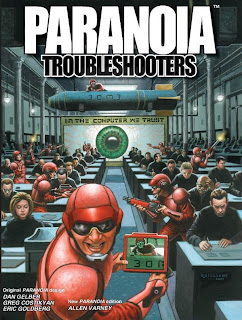 In the Paranoia rpg, secret societies are banned and membership is punishable by a trip to the incineration chamber. Mutations are treated similarly. Of course, by default every player character must be a member of a secret society and have a mutation.

I was thinking of doing something similar for Tekumel games. Membership in a secret society is no problem. It doesn't typically have the same deadly consequences as in Paranoia, but might effect some situations. Or the secret society could be devoted to the Goddess of the Pale Bone or one of the other Pariah Deities and then could indeed have fatal consequences!

Mutations are a different matter. One could substitute the political party or power block affiliation, but that follows on from the secret society to a certain extent.

The "off the boat" starting scenario might actually be the equivalent, now that I think about it. Especially if you play with strict and deadly enforcement of breaches of protocol. Being "foreign" is just like having a mutation!

The problem is that in Paranoia the PCs have access to six identical clones. Each time they die the next clone is activated and put into play. This allows the GM to be somewhat merciless without slowing game play by having to re-roll characters all the time.

I suppose one could start the PC's in the Foreigner's Quarter and say they have a Shaman that can bring them back, but only six times, perhaps with increasing "side-effects" or "defects" as they go along. They are all members of secret societies either because they are a branch of the same temple equivalent in their home country or because they have already been poached by local operatives.

An alternative is the method of "zero level" characters used by Dungeon Crawl Classics, an Old School Renaissance (OSR) rpg based on original D&D. They advocate starting with a large number of these zero level characters and just playing a no-holds barred game. Of course most do not survive but those that do go on to become the player's main characters, being promoted to 1st level at the end of the first adventure.

I think this is actually what I am going to try out: an "off the boat" game, which I have actually never tried before, with the players all being Naqsái, from the Southern Continent far to the southwest of Shényu. They worship of the Goddess of the Pale Bone but know enough to keep this a secret. This gives them two potentially lethal handicaps similar to those in Paranoia.

Below Shényu (to the bottom and bottom-left looking at the map) are the Naqsái lands. They were never under the power of the Priestkings, and if one were to follow the coastline west for about 300-400 Tsán you would find the city of Dhalái. In that city the Goddess of the Pale Bone is worshiped as is the One Other. Farther along the coast is an even bigger city, Balái, and these two cities make up the core of the Naqsái settlement in the region.


The whole purpose of this is to try and ease players into Tekumel's alien cultures. Playing it the "paranoia way" allows the referee to be uncompromisingly harsh.

But maybe that is the way most people play EPT already?
Posted by phf at 1:26 PM 2 comments: