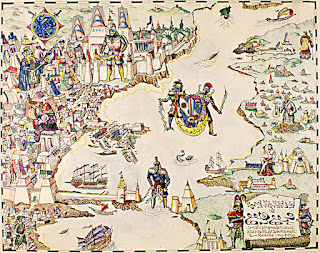 Béy Sü - "the Soul of the World", Illustration by MAR Barker

Capital of Tsolyánu, the Empire of the Petal Throne, Béy Sü is located on the west bank of the Missúma (or Mssúma) river, about 1000 tsán (1333 km) north of Jakálla and the sea. The only known map of the city is the pictoral map on the cover of the original "Empire of the Petal Throne" game box. This was drawn by Professor Barker and depicts some of his early concepts for Tékumel (such as the "heater" shield with the medieval-inspired heraldry on it!)

There are text descriptions in the first of the Adventures on Tékumel solo books (blue cover) and in the Man of Gold novel. Based upon the description in the solo book I did the following sketch map, trying to reconcile the text with the EPT box illustration. 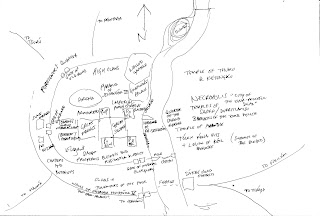 The box art doesn't show the outer ring wall, that of Emperor Hejjéka V, the "open-handed", but it could easily just be out of frame to the South. I have taken the southern-most bastion on the eastern side of the river to be a sákbe road fortress at the entrance to the two roads leading to Fasiltúm and Thráya. The box art doesn't show the wall to the north of the city either leading to the question whether it extends all the way around. The wall shown in the art is undoubtedly Patyél’s mighty wall.

In this sketch I assumed that the central citadel is the Governor's palace with the "walled gardens" beyond. This arrangement appears to differ from the Man of Gold text, which places the Governor's palace north of the city and surrounded by gardens. Looking at the box art there certainly seems to be a forested patch immediately north of the city. Could this be the southern part of the Governor's vast gardens? Perhaps the citadel that dominates the central part of Béy Sü in the box art is not the governor's palace at all, and that ediface is an even more imposing structure not shown? Could it be that the fortress shown is the "Pyramid of Ssirandár III"? The Professor was well known for using terms in unconventional manners - his use of the word "pyramid" is not meant to connotate to that used to house Egypt's Pharoahs and he frequently uses the terms "many-legged serpent" and "worm" to describe things that are neither snakes nor worms!

There seems to be an island just north of the walled gardens. Presumably part of the Governor's palace gardens as no structures are shown, though admittedly they could be out of frame to the north. Possibly the location of another Imperial Prison - Jakálla has many prisons, why not the capital?

The descriptions I have found [are there others?] are missing some locations: the Foreigner's Quarter, for one; and the numerous barracks for the other legions headquartered in the city; also the other temples. The Man of Gold text seems to indicate that the Temple of Thúmis - the Temple of Eternal Knowing - is within the city and not on the eastern bank as stated in the solo game book description. Possibly there are two temples, or perhaps it is just a temple to Lord Keténgku, the cohort of Thúmis. To me, it does make sense for the temple of Keténgku to be located out of the city. I imagine it to be a Great Hospital, if the Tsolyáni have such things(?), located away from the stink and contamination of the city.

There are two, possibly three other gates not shown - at least, there are three other sákbe roads: to Haumá in the south-west, to Tsurú in the north-west and to Avanthár in the north.
The gate in the outer wall used in the solo book (the road to Usenánu) is also not named.

From the text of the solo book description one can determine that the sákbe road "faces" west - that is, its high side looks to the west, with its low side facing the river. This is known because the text describes the character being able to see the sákbe roads on the opposite shore and this would only be possible from the upper parapet otherwise. As that level is reserved for the guards, high officials and imperial messengers, the low side must face the river. There is no indication how the other roads are aligned, but I suspect that the southbound road to Thráya faces the river, while that to Fasiltúm faces to the south-east. The northern road to Avanthár [I think] would face west, the road to Tsurú, south-west and that to Haumá south. This assumes Mu'ugalavyá to be the greatest threat and thus the one they would be facing towards.


I've been doing a few doodles and researching the kind of names used for locations in existing cities. The names of Tsolyáni Emperors are popular for things like gates and major thoroughfares.

They are focused primarily on commerce and travel. Clans related to transport - whether by porter or chlén cart; shipping; provisioning; wheelwrights; and entertainment of various kinds predominate. High clans might maintain small clan houses for their members to stay while travelling. Administrative buildings are small except those required for commerce and travel related needs. Temples restricted generally to small shrines as is the case in Sétnakh (see "Seal of the Imperium" Vol 1 No 1.)


Metlán - the larger of the two. More up-scale. River Police maintain a small barracks and wharf. Most of the nicer clan houses are located here. Hostels are more up-market as well. No permanent slave market. Small temple to Lady Avanthé. A number of clans run ferries across the river, competing with each other and with clans from Jáyo. The ferries are stratified like the hostels with most of the up-market ferries operated by clans based out of Metlán.


Jáyo - smaller and seedier than Metlán. Has a small but permanent slave market. Largely devoted to entertainments. The temples of Dlamélish and Hriháyel are well represented. Neither town has a proper "foreigner's quarter" but Jáyo itself is such a mix that it essentially serves this purpose. Generally speaking high status travelers prefer to travel through to Metlán rather than spend the night; unless, of course, they are given to hedonistic pursuits! The "House of the Emerald Curtain" caters strictly to those of high standing, with the House Guards roughly turning aside any who don't "make the grade."

Email ThisBlogThis!Share to TwitterShare to FacebookShare to Pinterest
Labels: Exploring Tsolyánu, Metlán and Jáyo, My Tékumel 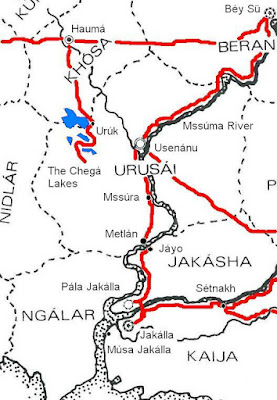 I've decided to start customizing My Tékumel a bit.

I've been reading up about the town of Sétnakh in the Seal of the Imperium (vol. 1, no. 1) and thinking about where else there might be town or perhaps even small cities. Looking at the maps I noticed how the Sákbe road running north from Jakálla crosses the Mssúma River on its way to Usenánu. It seemed likely to me that there would be a community there, probably on both sides of the river, as the Mssúma is too wide to bridge so there would have to be ferries. I decided I wanted something along the lines of Buda and Pest, two small towns that eventually grew to become modern-day Budapest.

For My Tékumel I decided on Metlán and Jáyo to be my version of Buda and Pest. Looking at the Provincial Map of Tsolyánu I noticed that they would be in two separate provinces: Urusái and Jakásha respectively. Perfect - I thought! All the more reason for them to be separate entities, and it means they can each have their own "City of the Dead" and municipal buildings, and the like.


I think they are probably rivals to a certain extent. Perhaps there are cross river feuds? I picture Metlán as being the larger of the two with a strong leaning toward Avánthe. Jáyo, I see as being still feeling the influence of Jakálla and so Dlamélish has more of a presence there.


That's about all I've got for them as of yet, but while making the map I noticed a spot on the Swords and Glory map that I thought was just the right place for another town: Mssúra. And then I started wondering about why that unfinished Sákbe road running south from Haumá curved about so much. I decided there are probably some large lakes in the area and added those: The Chegá Lakes. Then I added another small town - Urúk - just for good measure.


I spent a bit of time thinking about the names Metlán and Jáyo but the others I came up with on the fly as I was making the map. No point in getting too hung up on the names! I'm not a linguist and cannot hope to get them in proper Tsolyáni form. Mssúra is of course inspired by the Mssúma River and Urúk is borrowed from Tolkien but at least looks similar in form to Urusái Province.


What I want to do is continue to expand these towns and use the area as the starting point at least for my games.
Posted by phf at 4:37 PM No comments:

Photo credits: A photo of Varanasi (Benaras) by Liday Kiran

I found this image while researching the Lohars, nomadic smiths of India. I had read about them in a National Geographic book published in the late seventies, and a quick search pulled up more recent articles online. The Lohars are the basis for "the Clan of the Third Eye Blue" a similarly nomadic clan in my Tékumel campaign. The name is borrowed from Greg Stafford's Glorantha, as fans of his world will recognize. I have no doubt that he was similarly inspired by the Lohar.

Anyway, I thought the view was a good impression of what the small town of Sétnakh might look like with the Ranánga river in full flood.

A couple of us have been trying to develop a "formula" for describing clans. I've posted my description of the Clan of the Third Eye Blue here.