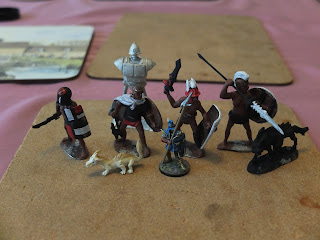 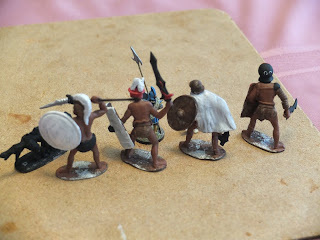 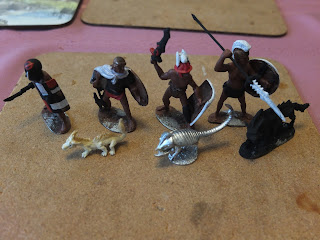 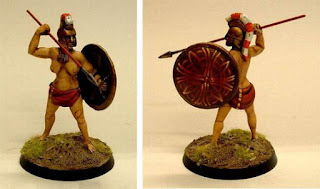 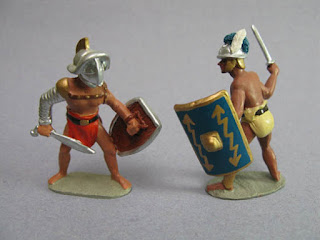 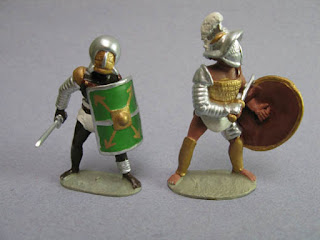 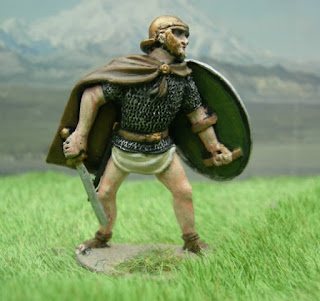 The sword, axe and spear blades are from various Reaper Bones chaos warriors with over-sized weapons that I sliced off with the Xacto and drilled out and/or glued in place with super glue. Those are all from figures I wouldn't actually use because they are too outlandish and in heavy plate armour so using them for bits works out perfectly.
Posted by phf at 11:54 AM 1 comment: 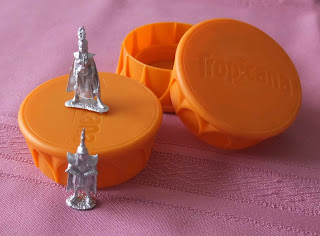 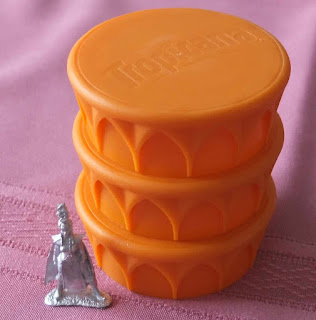 Where we are Tropicana recently switched from cartons to bottles for their orange juice. It wasn't long before I noticed the cap - see above pics - and realized one would make a pretty nifty dais. Or perhaps a fancy column as shown in the second pic.

All that is needed is to craft up some sort of surface to cover the logo on the top and voilà, a dais!

The Tower of the Arch-Mage: Exploring Ngála - Part 2 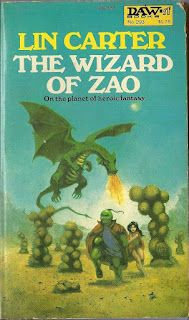 The Wizard of Zao,
One of my favourite novels...

Often when I visit the local dollar stores I am looking for stuff I can turn into other stuff. Equally often, however, I never get the time to actually execute those plans. Today was one of those rare instances!
I had spotted a Christmas decoration in the remnants of the Xmas section. It was a cone shaped wire thingie covered in gold glitter and a few coloured beads. I guess it is supposed to be a Christmas tree?
I decided it would make a nice frame to build a tower roof around so I bought it. Afterwards I decided I should have three but now all the Xmas stuff seems to be cleared away. Moral: buy it when you see it, don't dither.
So I had decided to make the roof of a tower. The tower of what? For what? For whom? I didn't know. I still don't know!
For purposes of this blog post I am going with the working title: "The Tower of the Arch-Mage".
Who is that, you ask? I don't know that either, but my first guess is the Wizard of Zao, that being a favourite Lin Carter book of mine. Not sure if he will have green skin though...
Actually, a thought: perhaps this is the guy with the walking palanquin from my last Ngála post (Part 1 - see previous).
So, some dollar store crafting: a Christmas decoration, some packing material from something I bought online, some duct tape and a few staples...
1) First I covered the cone with duct tape. 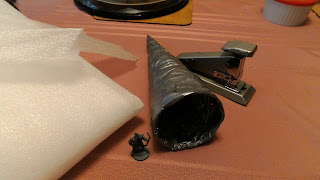 2) I discovered some packing material that was flexible and easy to cut...and not
too thick. Suitable material for tiles? 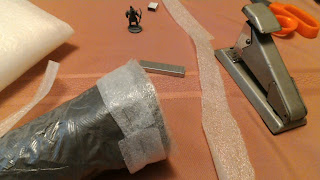 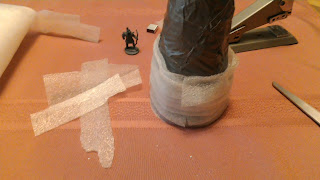 2) I tried stapling on the first few strips, but quickly switched to duct tape. 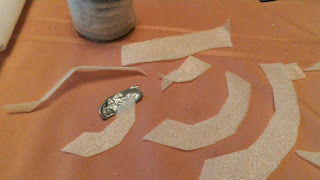 3) Somewhat belatedly I realized that I should be cutting the strips into curves!
4) The last step is to cut into the edges of the strips to make the individual
tiles. 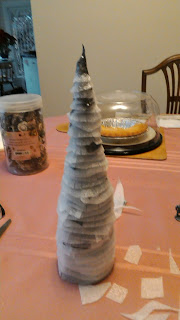 Compared to a 28mm figure they are quite large! Which is why they have lasted so many millenia!
5) Finishing? A coat of Gesso, maybe?
Cost so far:
Christmas decoration: $1.50
Packing material: free (somebody sent it to me).
Duct Tape: $4 for the roll. I used about 3' maybe. Maybe 5% of the roll.
Staples: about a dozen (from "stock").
Time? a little over 2 hours, including time to take pictures and compose email.

When I went to put Part 1 of this series up on other forums, such as the Lead Adventure Forum, or The Miniature Page, I realized that nobody would have any idea what I was rambling on about. Or, at least, many people wouldn't. So I wrote a bit of a blurb as a sort of intro. But then I realized that I should have included that in my original post. I never got around to editing that, so here is the blurb, belatedly, for your enlightenment and enjoyment. ;-)
Ngála
An ancient city on Tékumel. I tried counting how old it is. The current empire, the Empire of the Petal Throne or Tsolyánu, is also known as the 2nd Imperium and is over 2000 years old; the empire previous to that was Éngsvan hla Gánga, "the Mighty and Powerful Empire" - the Empire of the Priest-Kings, which lasted 3000 years, give or take. Before that was the 1st Imperium, Nayári's Empire. That went on for 10,000 years after her death and Ngála was old even before Nayári founded her empire.
You can see it up at the left edge of this map... 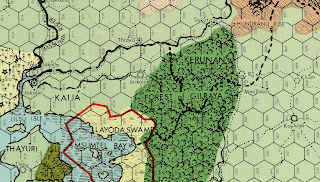 https://heroesoftheage.blogspot.com/search/label/%C3%89ngsvan%20hla%20G%C3%A1nga
Of course, after 15,000 plus years nothing could possibly be still extant above ground, right? Yes, well, sure, if one were talking about an ordinary city. But Ngála was no ordinary city, and now is no ordinary ruins. We know the Temple of Hriháyel, the Dancing Maiden of Temptation, uses at least parts of the site for summoning demons so it is not a great leap to think the city as a whole is special.
Furthermore, there are probably multiple iterations of the city, possibly some distance apart as the city developed historically. My "take" is that there is
1) Ngála, the ruins where the Hriháyel priestesses carry out their rituals. This is on the Nyelmáyel river, the River of Dreams. At least in My Tekumel, it is! Your mileage may vary, as they say. I see it as a sort of Tékumel version of Deadwood, or Bartertown, or the Five Points area on NYC in the 1800's.
2) Then there is Pála Ngála, literally "Old Ngála", which sprawls further to the West and comprises many of the older incarnations of the city spread over a large area.
3) Finally there is "Greater Ngála" - I still need to look up this would be in Tsolyáni.  ;)   Greater Ngála exists beyond this realm, in the realm of sleep: the Dreamlands. Greater Ngála exists as it was at its height, or as some version of it at its height, or possibly all versions; the priesthoods are still debating these points.
Posted by phf at 11:23 AM No comments: