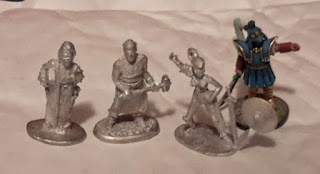 Here are some figures sold by Prince August and sometimes seen in Hobby Shops in blisters. They had a small fantasy range, and also a small post-apocalyptic range (think Mad Max). I don't think the full ranges are available anymore, but select blisters are available on their site. I recently picked up the figures shown. The Sage will do nicely for a Temple Librarian, an Undying Wizard or in Pulp Games. I don't mind about the specs. The Blacksmith is nice as well. No beard, which is a plus. The female fighter makes a good Aridani. The helmet even resembles that in one of the original concept sketches! 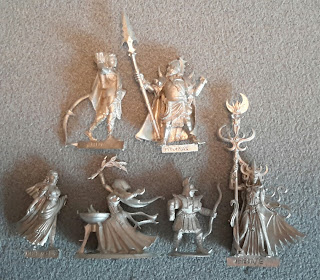 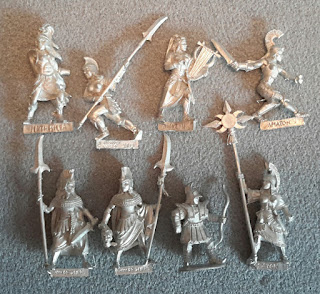 Crocodile Games always make nice figures and are currently working on their Wargods of Olympus range. I backed their Kickstarter and selected the Amazons for my faction. As you can see, they are large figures compared to typical Tekumel Project fare. That may or may not bother you... 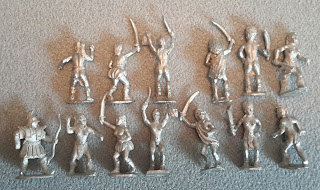 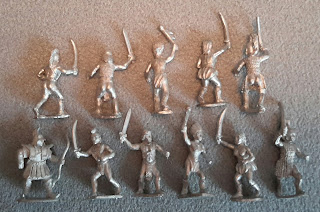 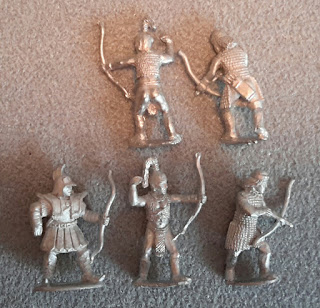 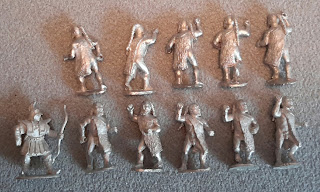 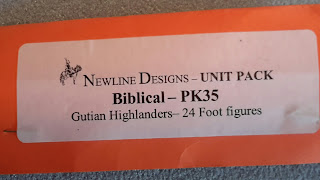 Outland Miniatures are part of Newline Designs, being a range of fantasy figures of the sculptor's own devising. I understand there is a World behind them, but have never seen any details published anywhere.

I have a bunch of their figures, but these shown are probably the most relevant for Tekumel. (I could add the Vampire Guard but didn't have the figures handy to photograph.)

The characters are all named but as I said the background has never been revealed so they are mysteries. Nice basic figures. The Indian Queen is from SHQs Ancient Indians (formerly Newline) and reviewed earlier.

Edit: looking closely at the character figures I'd say they would be prime candidates for headswaps! (...the size is right...) Just saying...

The Witchcult are a nice selection of blood-crazed warriors! My plan is to use them primarily as Tsolei islanders - some factions have all-female crews for their boats. Also, as part of my Haida Pakalan pirate crews, and as pit-fighters.

The Witchcult also have some very nice cavalry mounted on wicker ponies! Not really "Tekumel" though. I use them for a different fantasy setting.

Lastly, Newline retained their Biblical ranges, as well as some others, when they went to SHQ. These Gutian Highlanders make good Mu'ugalavyani skirmishers with their destinctive hairstyle. Some of the Witchcult with mohawks might get mixed in as well.