I should mention that The Warlock's Home Brew has a nice series of tutorials on Map Making, the latest of which you can find HERE.
Posted by phf at 3:54 PM No comments:

I'm looking for a Blog!

There is a blog - I can't quite remember it's name - but it's got "paint" in the title or has something to do with painting. And it's blue - the main colour is a shade of blue. And the header has a nice painting. I keep stumbling upon it through other blogs I visit but I keep forgetting to follow it or bookmark it.

And now I can't find may way back!

It's one of those places that you can't get to unless you are not really trying. Grrr...

EDIT: Found it! It's called "The Pictorial Arts", which I got to via The Warlock's Home Brew. So it is about painting, though "paint" doesn't appear in the name, and the colour theme has blue in it. And the header has a nice painting. Happy again... :-)
Posted by phf at 4:23 PM No comments:

Email ThisBlogThis!Share to TwitterShare to FacebookShare to Pinterest
Labels: Nothing to See Here

On the Painting Desk 2 - Photos 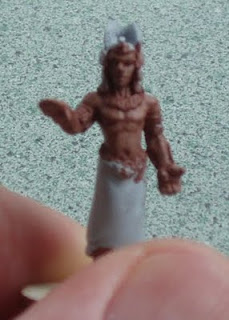 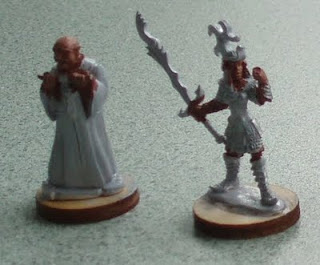 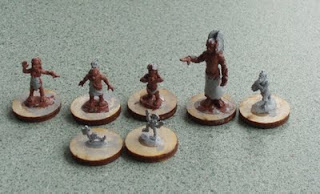 Puppet Master vignette
So here is conclusive proof that I don't know how to take photos! Hopefully where there is room to improve, improvement will occur!

Sculpts by Alan Marsh, John Winter and Federico Genovese. Painting and photography (!) by moi. (Click on the picks to bigify them.)
Posted by phf at 10:39 AM 1 comment:

Email ThisBlogThis!Share to TwitterShare to FacebookShare to Pinterest
Labels: Painting

On the Painting Desk

I've started painting a few of our new releases: Princess Vrisa, the Messenger Vignette, the Sacrifice Vignette and the Puppet Master Vignette.

For the flesh I am using Foundry paints - the South American triad (code #119), though I don't like the lightest colour so I am just using the Shade (119A) and the main colour (119B). One could equally well use a Ceramcoat or Delta terracotta, or something like that, for the shade but I'm not sure what one would use for the next colour. Foundry's figures and paints are generally nice but their pricing is crazy and not very fair for North American customers as it doesn't reflect true exchange rates. My advice: take advantage of their sales!

I'm just starting to think about what colour to paint the Puppet Master's kilt, and those of the three children in the vignette. I don't think it should be the typical plain white kilt typically used for "ancients". I've been doing some research on fabric patterns, searching mainly for traditional Indian designs. I also dug out some design books I picked up dirt cheap at a sidewalk sale one day - they are booklets intended for embroidery and similar hobbies. I thought "these might be useful sometime" and bought them - they were only a dollar or so each anyway, so why not? Anyway, that was a couple of years ago and I've finally found a use for them. I have Persian and Japanese designs and also a booklet based upon some famous designer related to ballet. That is, I think he designed the costumes - the designs are all "eastern" - Turkish, that sort of thing.

To my mind, there are two things to consider: the colours to use and the pattern, if any. There is a lot of colour association in Tsolyani society (and other Tekumeli societies, in general) - the gods all have colours (and often metals) associated with them; the Nation has a colour associated with it (azure blue for Tsolyanu, for example); and the clans have colours, often based upon their religious leanings. Unfortunately, in the case of the Puppet Master's clan - either the "Clan of the Striding Incantation" or the "Society of the Hands Which Are Not Seen" - not much detail is known. My feeling is that he is a performer, so he would be colourful. Though not of high status, Puppet Masters are revered throughout the land so he could have fairly expensive clothing. So that means a pattern. Something that I can paint! And it means finding the right colour combination...
Posted by phf at 9:15 AM No comments:

Email ThisBlogThis!Share to TwitterShare to FacebookShare to Pinterest
Labels: Painting

In case you missed them, Dariel Quiogue over at the Hari Ragat Games blog has been posting a great series about Heroic warfare, the use of Glory, organization, etc. Check out his June blog posts, starting with "A Fistful of Spears"...

In cased you missed it, the Yaqqothl Grimoire posted this "heads up" about some d20 "guidelines" for Zothique:

Oh, and I added a link to a preview on YouTube to yesterday's equally amazing book...Reconquêtes
Posted by phf at 6:07 PM No comments:

Email ThisBlogThis!Share to TwitterShare to FacebookShare to Pinterest
Labels: Zothique

The Art of François Miville-Deschênes

Just discovered this guy yesterday! He's French so you might have to source Google translate or Babelfish, but I think it is well worth it , even if it ends up a little garbled.

Anyway, it seems he has been working on a fantasy graphic novel about Amazons - I haven't translated all the passages - this is just what I can glean from the pictures. It's called Reconquêtes - if you follow the appropriate tag at the side you watch how it has been developing.

The cool thing is that it isn't even published yet! It's due to be published on June 20th, by Lombard. I'm going to check whether my local comic store can get me a copy.

I think this guy would be great for a Tekumel Graphic novel - though it would cost a fortune. He's not shy about nudity, for one, and for another his scenes are well populated with good attention to the architectural details.

Preview
Posted by phf at 5:04 AM No comments:

Locally we have been trying out a new set of wargame rules called "Hail Caesar". Written by Rick Priestley (the Warhammer guy, if I am not mistaken) and published by Warlord Games, they are just another set of ancients rules.

Overall I like them so far. We just did a Roman vs Celt mash-up to try and figure out the rules. No magic, of course, but the basics are there. Units have a clash value for when they first engage and a sustained value for continued melee. Romans are a solid 7 in each, whereas Celts are 9 clash, 6 sustained. (The numbers being the number of dice rolled.)

There are rules for closing ranks like the Ancient Greeks would do if being charged - apparently they had three different spacing depending upon whether they were marching, advancing or receiving an attack. The close ranks rule also covers things like shield walls. There are rules for a few formations such as wedges and phalanx.

What's missing from a Tékumel gamer's point of view are the ritual duels at the start - easy enough to add, but what would be the effect? Also the magic, but again I think probably fairly easy to add. The hardest part about the magic is how to handle the illusions.

It would be nice also to try and model some of Tékumel's unique formations. I don't think the armies fight exactly how we might assume they do. This probably applies to the RW as well. Nobody really knows just how phalanx vs phalanx worked do they? It's not something you can simulate as you can't go around jabbing people in the eyes with spears.

There is that quote about "one more step" - which led to victory, but what does it mean? Were they shield against shield pushing, as I think some interpret it. Or were they at spear-tip length dueling and the side that advanced into the spear tips first would over-awe and vanquish the other (less brave) side(?)

On Tékumel we have the standard phalanxes but then we also have units discarding their shield just before combat and going in with two-handed weapons. There are formations were one person protects the other - often, but not always, a missile user. Examples are the "Meadows of Death" formation or that Yan Koryani gurek were the medium infantry female protects her heavy infantry male partner armed with a pike. So the women with their large shields would presumably form the front rank and then the males with their pikes the second. With the pattern presumably repeating. Or would it? IIRC, the numbers of medium and heavy infantry do not match one-for-one and yet the fluff says that members of the unit have to immediately remarry if one is slain, or leave the unit. (Note I might be confusing Tsolyani and YK units here - I don't have my references in front of me. Apologies if I am leading you astray.)

Anyway, my point is that for a Tékumel game we might want to consider basing our figures differently, and perhaps using some special rules to model the little idiosyncrasies of Tékumeli warfare.
Posted by phf at 11:08 AM No comments:

Eowyn and the Nazgul

Don't know if this has been posted anywhere before but I just came across this pretty cool Art Challenge:

Eowyn and the Nazgul

Basically a challenge to produce art based upon the famous confrontation between Eowyn and the Witch King at the climax of the Battle of Pelennor Fields - that's Tolkien, don't you know! ;-)

It's over now but check out the the entrants!
Posted by phf at 5:16 PM No comments: