The Black Hoods of Lord Hrú'ú 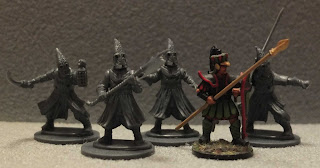 I've been putting together a box of Frostgrave cultists to act as "Black Hoods" - agents for the Temple of  Hrú'ú.

I have to say that this set is really nice! So far I've put together four with crossbows and four with 2-handed mauls. Also a guy with a 2-handed sword from the other Frostgrave set. This guy I'm converting so he is pointing with his left hand. There is also a guy with a lantern (which also comes from the first Frostgrave box). There are twenty figures in the box. I am using the fully hooded heads and there are just enough to do that, although they are not all the same style. That is fine though, as Lord  Hrú'ú likes a bit (a lot!) of variety! The plan is to do two guys standing on guard, but not with the spears that came in the box...I am going to look at using Shen halberds.

I am very impressed by this set. It even comes with some nice thin round bases. There are four body poses: standing, running forward, action right and action left. The main failing I can see is that the left arms all have hands which are not in a gripping pose. I would like to do some two weapon guys and will have to do some converting to get that. Not sure if I'm going to give these guys shields. I want a couple of more boxes though!

The plan is to paint them black and purple. Black hoods - hence the name - with purple face masks. Oh, the other failing is that they are wearing baggy pantaloons. This may or may not be an issue to you. Myself, I am past bothering about little details like that. There are so many anomalies in the canon that one just has to "go with the flow" and work with what you've got. 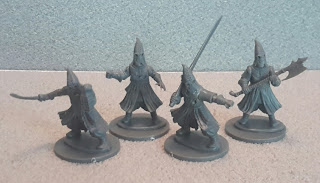 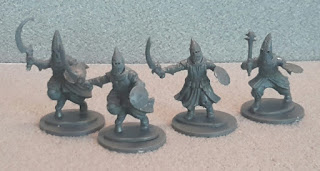 My Tékumel Bestiary (1): the Akáta and the Hrá 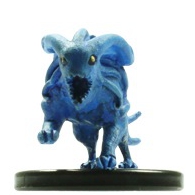 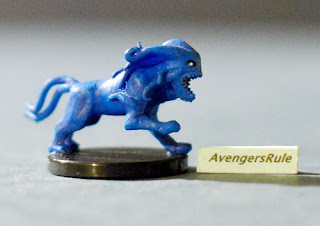 The Akáta, as named by the Mu'ugalavyáni (Nirikáta: Tsolyánu), are what some might call the Swamp Folk's "best friend", though that race are so inscrutable it is impossible to say whether they do indeed harbour the same affection for their pets as humans do their dogs. The beasts were brought to Tékumel by the Heglethyál, as the Swamp Folk are called in Tsolyánu (A'láthish: Mu'ugalavyá), from their Home World of Unukulhai and like their masters Akáta are at home in the water. They are used for all the same uses that humans find for their dogs: hunting (and fishing!), tracking, protection and, perhaps, companionship. Any party of Swamp Folk is likely to be accompanied by one or more Akáta, even those serving aboard ships.

The miniature is from the Pathfinder Miniatures range, by Paizo. "Akata" - without the accent - is the Pathfinder name for the creature. Nirikáta is something I came up with. It means "blue sacrifice" in Tsolyáni, assuming I've got the translation correct. I wonder why it's called that?

One of the pics is from an ebay auction. The seller, AvengersRule, is quite good in my experience (ordering from Canada). I find his name card is a helpful way of judging the size of the figure, something that is often hard to do in many auctions. 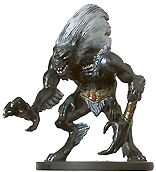 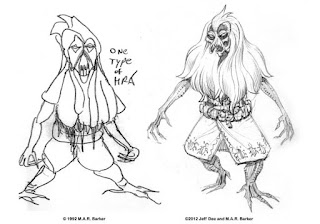 Hrá are blood-sucking undead creatures that come in many forms. They are the creations of the Temple of Ksárul, formed to meet their needs. The figure illustrated is just one form. Some stand 10-12 feet tall. Others are created as beasts of burden, squat of form and very powerful. Many are armed: typically with mace, sword or spear. They are difficult to kill and even more difficult to lay to rest permanently. If set a task they are relentless. Priests, especially those from the Temple of Ksárul, can control them if they have sufficient knowledge of the lore; they can even attempt to control, or at least deter, Hrá under the control of another.

The miniature shown is from Wizards of the Coast: #45 - Draegloth - Underdark - Dungeons & Dragons miniature D&D. Remember that Hrá can be found in many forms. I will be writing more about them soon... 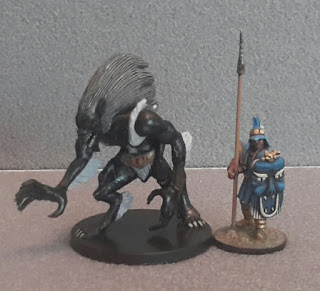 Size comparison with one of our 28mm troopers.