Digitizing Tékumel, Part 19: a return to the Mssúma river valley... 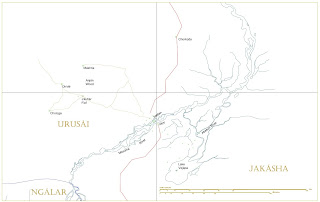 After a long break, I am starting to look at my "Digitizing Tékumel" project again. Here is another look at the Mssúma river along the border of Urusái and Jakásha provinces. The sákbe road runs south from Usenánu and crosses the river at what, in My Tékumel, I am calling the twin towns of Métlan and Jáyo. Métlan is in Urusái province, while smaller Jáyo is in Jakásha province. For inspiration I am drawing somewhat on the early history of Budapest which was originally two towns on opposite sides of the river.
To the west, Jikutlár fief is visible. This fief features in one of the Solo Gamebooks - the one with the green cover, IIRC. I have located it according to the description in the book: approximately 200 tsán north of Jakálla. The other named places - Anján Wood, Cholúga, Máshtla, Diridé, and Chorkúda - all come from that adventure.
The other two named features - Lake Vejápa and the Abásun River - are my additions. I've stolen the name "Vejápa" from a work of popular science fiction that many may recognize. The word "abásun" means "white" in Tsolyáni, so the Abásun River is the White River. I haven't decided why it is called that yet.
The Abásun River is a dry bed during the hottest months of the year but as the rains come and the Mssúma River rises it flows south into Lake Vejápa. The lake itself gets quite shallow in spots during the summer. Note the small island in the middle. It is possible to wade out to it some summers if one knows the route. When the floods come the Mssúma overflows its banks and the Abásun disappears as the whole area is inundated. Lake Vejápa expands about ten times its original size and neighbouring villages exist as tiny islands or clusters of huts on stilts. 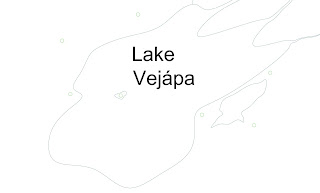