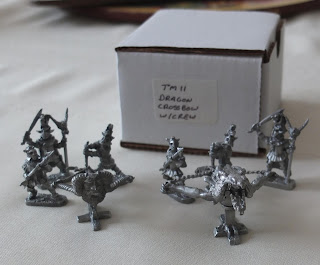 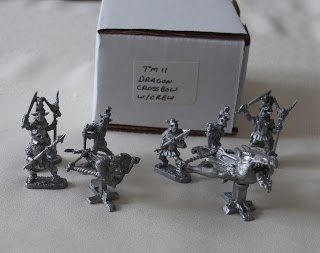 Old School Miniatures from Perth Pewter. I had been thinking about ordering one or both of these for a long time, only two things held me back: the price and that I thought they were coming from Australia.

But the other day I noticed the company had a US address so I talked my way around the price and ordered one of each style - Demon or Dragon head design on the war machine. At the time the site didn't have a picture of the Demon head machine but after a little research on the Lost minis Wiki I guessed it was the one shown there. 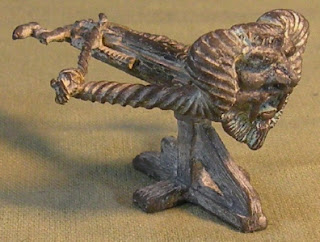 The parcel arrived today, confirming that is the case.

The sets have Games Workshop prices but they arrived in gift boxes and were pre-assembled so that is a bonus! :-) The crew is common to both war machines.

I think these make great proxies for Tekumel gaming. Not sure which nation I will put them with yet. Probably I will choose a legion that has multiple sizes of war machines - i.e. light and heavy ballista - because the Demon headed war machine is a bit smaller than the other. I think I'm leaning towards Salarvya however, as the Salarvyani are known to have gargoyles on their buildings and these designs invoke that sort of thing.