Reputation, or 'Rep', is the main stat for many Two Hour Wargames (2HW) rules. It is basically experience, skill and knowledge all rolled into one - it is as much how the World views a character as it is a rating of how good he is. Which is why it is called "Reputation". Basically if someone is a known hard case then probably he has the skills to back that up.

But under the 2HW rules, even the best can have a bad roll and be taken out by a lowlife. There are no hit points, as such. Only: No Effect, Out of the Fight (OOF) and Obviously Dead (OD). Now characters do get extra benefits, so they are not easy to kill regardless how bad the roll, but they are not as invincible as characters in some games.

In addition, if a hero has a bad adventure his Rep can actually go down for the next one. This basically represents lingering physical injury, or perhaps a certain demoralization - the hero is basically functioning at sub par abilities until he "gets his game back".

In a Band of Joyous Heroes, I want to get a more Tékumel flavour so I am thinking of doing things a little differently than just one stat. Whether this will work within the same basic system remains to be seen. More on this tomorrow...
Posted by phf at 7:18 PM No comments:

The Garden of Kama 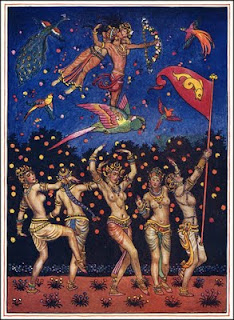 Another great post on the Golden Age Comic Book blog! This being illustrations from a 1901 compliation of Indian love songs, illustrated by John Byam Shaw (1872-1919).

I love the colours and patterns in the materials. It is that kind of vibrant colour that I think would be found in Tsolyánu.

I think I'm going to get figures made based on the dancers! :-)
Posted by phf at 6:36 PM No comments:

Email ThisBlogThis!Share to TwitterShare to FacebookShare to Pinterest
Labels: Fashions

He hasn't updated his blog for a while, but his stuff is good none-the-less. Some examples:

His take on the Battle of Grunwald.

2) Rich Longmore, who will be doing some stuff for us in the coming months.
Posted by phf at 1:40 PM No comments:

A Band of Joyous Heroes (BoJH)

It's been a while since I worked on these rules - maybe even as long as six months or more. I became too focused on getting the background info sorted, or rather, how I was going to communicate it to players - and that led me off on a series of tangents which I won't go into now.

Lately however, I've started to think about the rules again. For those who don't know, A Band of Joyous Heroes (BoJH) is a game set in MAR Barker's Tékumel setting; the setting from the old TSR game: The Empire of the Petal Throne (EPT).

What sort of game you ask? Well, in the past I've called it a "Tabletop Adventure Game" or "RPG-Lite" and, as you may know, it's based upon the Two Hour Wargames family of games. They have started using the term "Immersion Game" for some of their games so I guess that is what it is.

It is definitely intended for tabletop play, definitely with miniatures, with the table representing the scenario or scene for the nights game. I should also note that Two Hour Wargames gets their name from the fact that their games are typically playable in that amount of time - so that is what BoJH is striving for. This means that if things work properly then you might be able to complete more than one scene in an evening. How cool would that be?

The term "Immersion game" comes from the fact that the rules strive to place the player in the role appropriate for the game. ie. the Squad Leader, the General, or whatever. They use mechanisms like "Reaction Tests" and "PEFs" (Possible Enemy Forces) to take away the powers of the 200 foot general. Power Gamers and Mini-Maxers need not apply. I have no idea if anyone has ever run a tournament with any 2HW rules, but I suspect they would not work too well for that purpose. Totally different mindset, IMO.

So my intent is to cast the players as Tsolyáni citizens, with all the rights and obligations that that entails. (This is why I have been so focused on background this last little while.) There would be no "adventurers" as such - not in the D&D sense. For one thing there aren't any traditional D&D taverns - a low status hostel probably comes the closest to that. The players are intended to be higher status, however, and Tsolyáni social mores would prevent to two social classes from mingling on such an intimate level. The peasant is very much the peasant, and his social superior is "Exalted One", if spoken to at all (not unless spoken to first!)

Another reason there are none of your typical "adventurer" types: everyone has a job. When I say everyone, I mean most people. There will always be some who don't work, and many in the high status clans don't work, as such, but where they don't work they have obligations, which has the same effect in that you don't hang about as a sword-for-hire doing odd jobs for wizards and such. Not that there are Wizards hanging about either - magic is pretty much controlled by the temples, so magic-users are priests (and shaman) who are generally employed by their temple in some role.

That isn't to say that there aren't adventures - there are. It's just that they have purpose. The goal of the game is to style the players as [potential] "Heroes of the Age"* in the employ of a Patron, or possibly Patrons. They could be acting for their clan or on behalf of their clan with another party; they could be acting in the interest of one of the Temples, or one of the political parties, one of the many secret societies or the Imperium itself. Their patron could be a wealthy or powerful individual (such as one of the Imperial Princes) or they may not even know who their true employer is.

This will necessarily effect the choice of characters a player can have. Broadly speaking, they can be from the same faction as other players, ie. the same temple or clan; from an allied faction, ie. another temple of stability; or from a reluctant ally, in a case where normally opposed factions have joined to achieve some mutual goal.

* The term "Hero of the Age" comes from the background material. Every Age has a great hero or heroes, who do fantastic deeds that become the stuff of legends; or, if they fail, become the cause of some great mythical cataclysm.
Posted by phf at 11:06 AM No comments:

Email ThisBlogThis!Share to TwitterShare to FacebookShare to Pinterest
Labels: A Band of Joyous Heroes

I tried to post yesterday, but after a lot of typing a technical malfunction (damn mouse) caused me to lose everything. I was so disgusted I didn't try it again - heck, I don't even know all that I typed - "I was on a roll", as they say! *sigh*

Anyway, basically I want to start using this blog for what it was intended - Tekumel gaming. I am hoping to post something daily - either on Kérdu, or on A Band of Joyous Heroes (BoJH).

Not sure if that is actually "doable" but I'll give it a try. And there is a "Short Adventure Challenge" coming up in September that I am thinking of joining, so if I want to use A Band of Joyous Heroes for that I'll have to set out at least the basis of the rules so people at least know what I'm talking about.
Posted by phf at 8:10 AM No comments: