A Band of Joyous Heroes: Actions and Combat 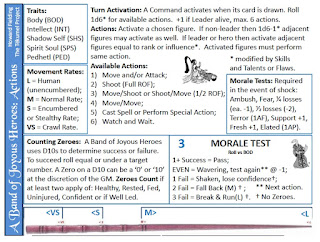 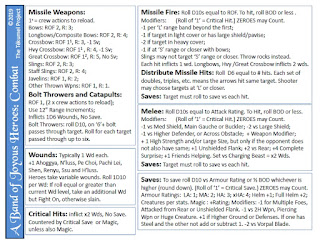 I'm a big fan of rules that can be distilled onto a single sheet. I don't think that will be possible with A Band of Joyous Heroes simply because of all the spell and creature descriptions that take up too much space, however, I can still make the attempt!

Yesterday I sent my latest draft of the first card: Actions on the front and Combat on the back. See above for what they look like. The are derived from the Dark Passage naval game I ran a year or so back. I'll be providing a detailed explanation later. Right now I'm trying to get ready for Cold Wars.
Posted by phf at 3:08 PM No comments: 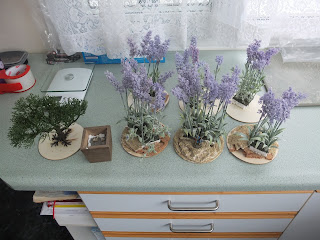 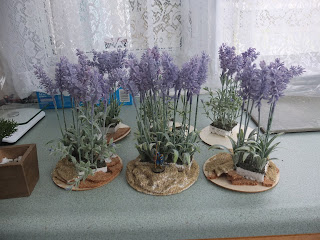 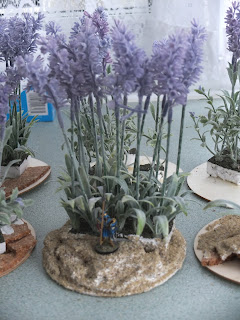 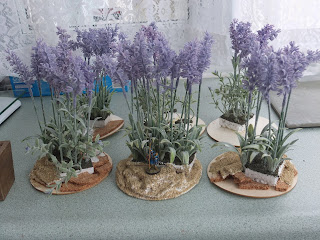 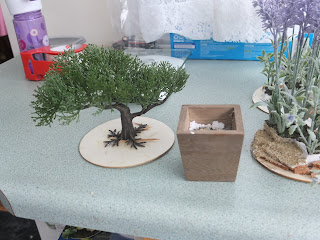 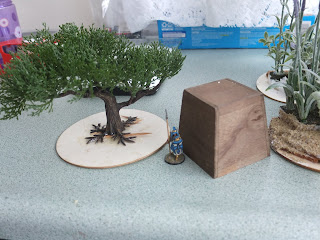 Almost everything purchased from Dollarama...

A few weeks ago I discovered a local Dollarama I didn't know existed so I stopped by and browsed for a while. I left with a few bags of "Stuff"!  :-)

Note that Dollarama is a species of so-called "dollar store" but one that items could be a buck, or $2 or $3 or more, depending on the item. All pretty cheap, though. In the above pictures, the bonsai tree (on left), the other plants (lavender?), the round bases, the cork, the white glue and the gravel all came from the store. The lavender plants came in the wooden holder which I think makes a good pedestal for a statue, or some other architectural feature.

The bonsai tree was one of two or three varieties and cost $4 CAD, including a rectangular display pot (not pictured). The lavender plants were $2 @ including the wooden flower pot. The gravel came in a jam jar sized container. I think it was $3-4 but don't remember exactly. The cork was two 12" square sheets for $2-3 and the round bases were all in one bag for about $2.

As soon as I saw the lavender plants I thought they would make some nice exotic looking trees for my Tekumel games. Afterwards I noticed that there are two types of leaves around the base.

The legion of Serqu trooper in the picture shows how they go with 28mm figures.

All in all, I think it was a pretty good find. Still some more work to do, but not much.

I might go back for more bonsai trees, and perhaps more lavender. How big a forest does one need?

Other things I picked up at the same time include some 12" square plastic grass mats (intended I think for backyard pools) and some plastic dinosaurs I intend to go all "Dr Moreau" on! :-)