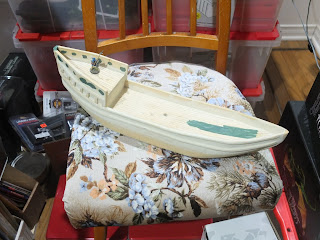 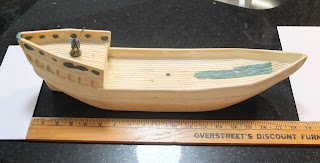 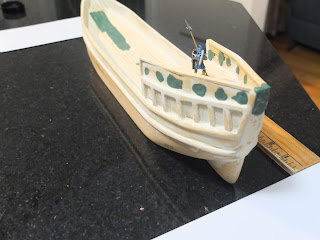 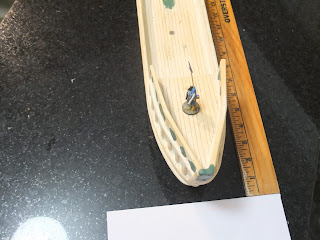 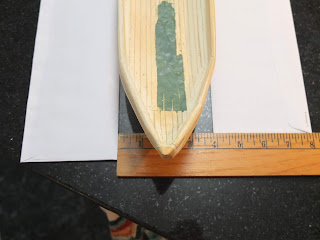 Height of Stern Castle is 5" (to top of rail)

This mighty was originally a 28mm Dhow made for a friend of mine by his Father-in-law. He gifted it to me after I did my Dark Passage naval game - Thank you again, Mike! :-)

For a home made model I don't think its that bad. The sides are not perfectly symmetrical but it has a sort of fantastical look to it. Its definitely got a "Dawn Treader" vibe to it! Which is what I want, as my ambition is to use it as a basis for some sort of large warship for Tekumel naval games.

If you look at the cover of the Empire of the Petal Throne box you can see ships and boats drawn by Professor Barker; they have more fantastical forms than boring old Greek or Roman galleys! That is what I want to achieve.

What I want to do is somehow mould this in resin and then make variants of it. The question is, how to best go about moulding something so large? It is 18-19" long, 4" wide and 5" tall at its highest point. and it has railings, which are surely going to cause problems.

So I guess I'm off to YouTube to look for advice. If you have any advice or information please feel free to offer it! Thanks in Advance! 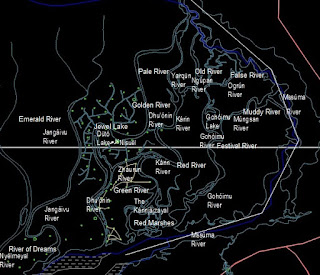 Latest work: I've taken my earlier attempt at sketching the delta and added my latest efforts at Nisuél. If you enlarge the image you might be able to get the hint that the splash of colour at Nisuél is in fact the cover image that I am tracing.

My older rivers are much wider than that in the cover painting. At least, as I currently have that scaled. Nisuél is about 600 meters from north to south along the river, measuring between the wall bastions. So the Nisuél map symbol shown above is about a kilometer across.

My initial canals now have to be re-thought out and re-drawn. And I need to decide how many other larger clan holdings are in the delta - and which clans they are!

The Red Marshes I've blogged about before >>> Here. I have to decide how large to make them...and how many forested areas to add as hunting reserves.

I also need to re-read the "Anatomy of a Peasant Economy" (LINK) to give me a better idea if I've scaled my Nisuél correctly. I can compare the real world example with the density shown in the artist's impression.


Lots of footage of rice paddies and raised secondary roads; just ignore all the modern elements. 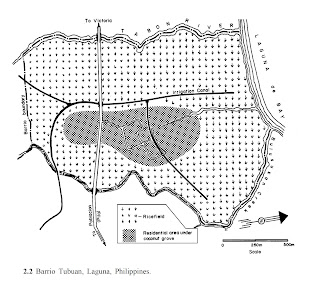