Nisuél, Seat of the Clan of the Golden Sunburst - Part 2 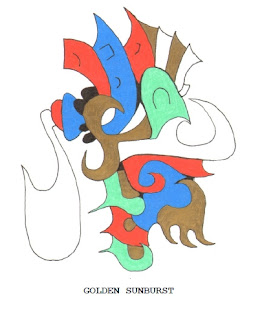 Gylph of the Clan of the Golden Sunburst
(Artist unknown) 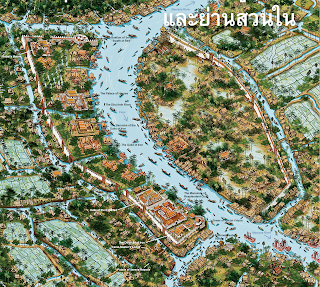 Plodding ahead with detailing the Mssúma river delta, starting with Nisuél, seat of the Clan of the Golden Sunburst, I have started to identify some of the location names. Don't forget to use the tags to find the rest of this series, and the overall "Exploring Tsolyánu" series.

Ever since I happened across this artist's impression of the city of Thonburi (Thailand) by Suthichai Ritthapatichai I have become more and more convinced that this is what the Mssúma delta looks like. Thonburi is even described as being a "canal and garden (or park) district". Which matches pretty much with Professor Barker's description of the delta being "...the Produce-Garden that feeds Jakálla..." and how it is "criss-crossed with canals and secondary roads."

Nisuél amounts to a good-sized village. It is located on the Dhu’ónin River (Golden River), one of the many distributary rivers that thread to-and-fro across the Mssúma river delta. Between them are networks of major and minor canals, creating a patchwork of fields and ponds, with woodlots scattered here and there, and secondary roads weaving throughout it all as best they can. The population of the delta is pretty dense, mostly employed in agricultural practices. It is a pretty safe district, with Tékumel's more dangerous denizens kept far away by vigilant warders and a millennia old policy of extermination for any that stray too near.

I've done a bit of research on the Clan of the Golden Sunburst. I've looked up personages in the various sources, principal of which is always the "Hardison Guide", as I call it. One thing that bothered me was that Alva lists the Clan Patriarch as being named "Nisuél"; bothered me until today, that is, when it finally dawned on me that they were just following the long standing practice used by the legions of the Kérdu taking the name of the traditional Kérdu. i.e. "Sérqu" is passed down through the ages, from one general to the next. Indeed, the Hardison Guide mentions that the "17th Sérqu" was a member of the clan. So I am reconciled with the idea that the Clan Patriarch is called "Nisuél" even as it is used for the community itself.

If you click on the above image you'll see I've used this in my attempt at naming the features on the painting.

Nisuél's Manse - which is the principal residence of the sitting Clan Patriarch.

Also shown is the Bastion of Sérqu, "Swath of Red", a reference to that 17th Sérqu mentioned in the Hardison Guide. A similar defensive work is at the southern end: the Tower of Kokún Vriyón, named after an Éngsvanyáli "Hero of the Age".

Other features I've tentatively - this is still only a first draft - identified are:

The Channel-Master's Station and the Canal-Master's Lodge, two of the clan officials charged with the smooth running of the Clan's business. I suspect the Channel Master out-ranks the Canal Master.

The Palace of Serene Repose, a guest-house for noble visitors.

The Domicile of Iron, one of the clan's own Temple and/or Mausoleums.

The Mansions of Resplendent Glory, the main clanhouse complex.

The Halls of the Exhalted, more Temples and Mausoleums, including monuments dedicated to the Clan's greatest ancestors.

The Guild of Iron, one of the subservient clans I've identified, this being hereditary warriors and bodyguards. I don't think "Guild of Iron" has been used before, and while there are no guilds as such, the term guild has been used: the Temple of Qon's "Guild of those Who Repel the Dark" (Source: Mitlanyál, Vol. 1).

The Palace of Heroes, being more palaces and monuments to the Clan's glorious past. Note that I think clan apartments would be scattered among these complexes for senior members of the clan to reside in.

So that is my start. As I said, a first draft. Coming up with extravagant sounding names ain't easy you know! ;-)